Love is fearless, and when one chooses to love beyond the borders of themselves, then they’re in a position to inspire, uplift and create change where it’s needed. Take this power couple, Justin Toca and Monica Toca for example… This eccentric duo have established a quarterly themed tribal house party at NYC’s Cielo nightclub where they’ve raised donations to fund a children’s organization called The Ale Ale Foundation. Thus, they are giving back to their community while enjoying life together.

Are they twin flames? Soul mates? Or just two love birds who were destined to meet for a greater purpose? Both were born worlds apart from each other with Justin having roots from Managua, Nicaragua and Monica from Dallas, Texas. And yet the two found each other in the NYC nightlife scene to later wed on July 14, 2013. Due to Justin’s heritage, he promoted Latin/Brazilian parties for over 20 years in some of the hottest clubs such as The Tunnel, Palladium, and Limelight just to name a few. And with Monica’s love for the Arts as a former Theater major and TISH NYU graduate, they combined their expertise and produced “The Toca Cielo Party”. 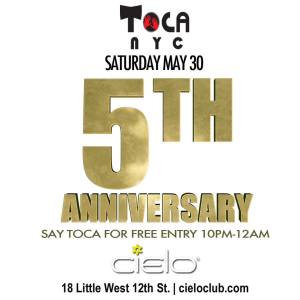 Four times throughout the year, they host a spectacular costume themed party with live drummers, conga players and burlesque dancers uniquely designed to provide a fantasy inspired atmosphere. In addition, they’ve even featured a snake dancer. (Yes! A real live snake). Risque, classy, flamboyant and extravagant – are all words to describe this eclectic vibe of Artists dressed in theatrical attire to unite underneath the umbrella of Afro/Tribal/World House Music and Samba.

On top of their event reaching its remarkable five year anniversary on the 30th of this May, they’ll also be celebrating the 2nd year opening of their Long Island City, Queens TOCA NYC STORE this Summer.  I know what you’re probably thinking? What else can’t this fabulous couple do? They definitely show and prove that the power of two is the secret to success… as everything they touch multiplies!

Within walking distance near The Socrates Park and The Noguchi Museum in Astoria Queens, lays their vintage shop which is quickly being recognized as the neighborhood’s treasure chest. Due to the couples love for travel, they’ve chosen unique pieces from around the globe that are rare to come by. Thus, with some of the antiques available for sale, it should be easy to find some beautiful gifts for Mother’s and Father’s Day! Below is a small selection of recommended items.

Let’s take it back to the top, when we mentioned that this power couple raises donations during the “Toca Cielo Party” to fund a children’s organization. Because of Justin Toca’s love for his native culture, he uses donations to fund an all expense paid trip (covering airline, food & hotel costs) to fly out four master Capoeira instructors who teach middle school youngsters the skill, discipline and dance of Capoeira in about 8 different cities within his homeland of Nicaragua. A fundraiser is done once a year, and they’ve been extremely successful in reaching their goals which is caught on camera when the kids are practicing while being filmed. (Also bare in mind, they also collect donations for their children’s organization at the TOCA NYC STORE if you can’t make it to their “Toca Cielo Party” fundraiser.) To help out online, click here Ale Ale Foundation.

With all this being said, who wouldn’t want to check out their night club event, “The Toca Cielo Party” or shop at their store? This couple seems to take the love that they have for one another and give it back to the world in everything they do. While enjoying each other’s company and common interests in The Arts, they’ve brightened up other people’s lives because of the natural passion that they have within themselves. That’s a true power couple! Hence, I support their movement and hope that you’ll support them too!  LIKE THEM ON FACEBOOK

Jasmine Clemente is the founder and creative director of Inner Vibrations Magazine. With a background in music and film, she decided to launch this publication to educate Artists on the importance of being balanced in the mind, body and spirit in order to sustain longevity in a fast paced business. Instead of promoting gossip columns and the obvious highlights of an Artists career, her interviews get into the heart and soul of the human being. Thus, the content you'll find in this magazine will inspire people to remain rooted in divine wisdom while living in alignment with their true passion & purpose.